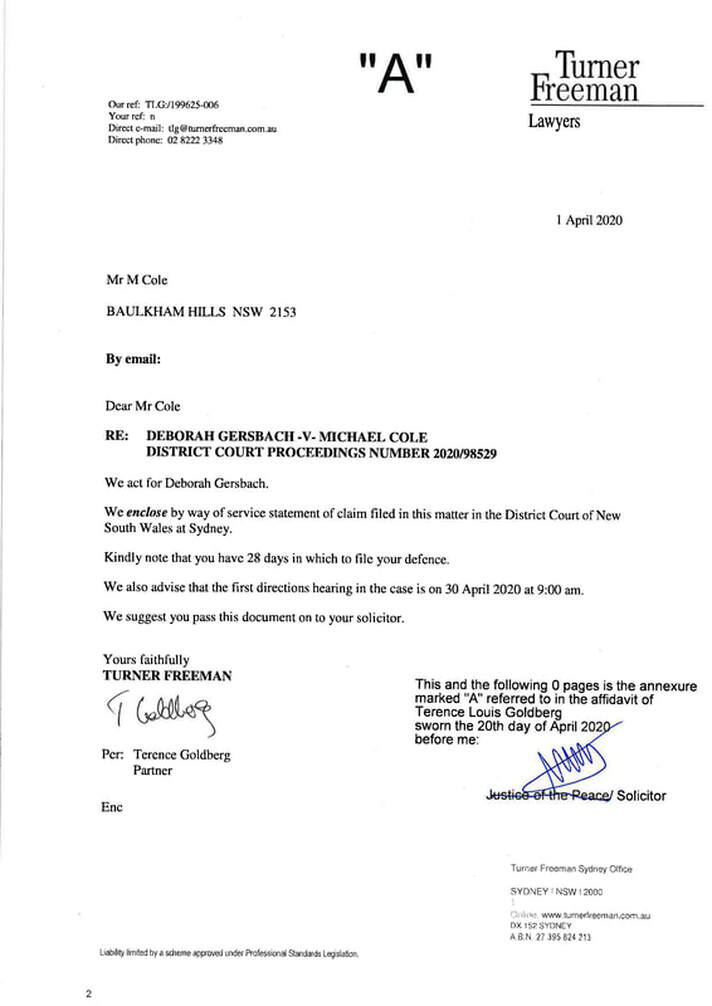 All these persons are directors of NWDS. In that capacity they, and all directors and Deborah Gersbach, were sent a copy of the text prior to publication for comment and correction. They did not dispute any facts in the text. In addition, directors of NWDS had been aware of these facts for years prior to publication and had ignored, and failed in their duty to act on, the facts complained of in this statement of claim. The documents proving this are outlined below.

The First Matter Complained of in its natural and ordinary meaning carried the following  imputations each of which was defamatory of the plaintiff:The plaintiff as CEO of NWDS, exercised control over all policy and direction decisions of the board of NWDS by appointing compliant individuals to the board and forcing board members to leave if they displeased her (whole matter but especially paragraphs 2, 18 and 21).
Answered below.

In breach of her duties as CEO of NWDS, the plaintiff refused to permit the board of NWDS to conduct an investigation into complaints of staff bullying by the plaintiff (whole matter but especially paragraph 4).

True. A senior staff member approached the board complaining that she had been bullied by Deborah Gersbach CEO. The NWDS Complaints Policy 1.7 required any complaint about the CEO to be made directly to the board. Deborah Gersbach insisted that all complaints must be directed to herself in the first instance and that she would resign “if this ever happened again”. The board resolved to comply. A letter to this effect was sent to the complainant. That complaint and later complaints were never investigated.

The plaintiff deliberately lied when she claimed that an assault on her by the defendant was witnessed by two witnesses (whole matter but especially paragraphs 7-9).

True. Deborah Gersbach lied when she claimed that the assault had been “clearly seen by two witnesses”. There was only one other person in the room; not two. And that person had a clear view and did not witness anything. (my italics).

The plaintiff deliberately lied when she claimed that an assault on her by the defendant required medical attention (whole matter but especially paragraphs 7-9).

The plaintiff deliberately lied when she claimed that she had reported to police an assault on her by the defendant (whole matter but especially paragraphs 7-9).

True. Deborah Gersbach continued to lie. She wrote to the board on 25 July 2017 re-stating her allegations and claiming they were all true. “The fact that both witnesses present at the meeting when my hand was hurt were not interviewed … I do not know whether she [the witness] saw it or not … I did attend the Doctor and told … that in my interview. He failed to confirm that in his report … the information regarding me going to the police … The continued inconsistencies in Michael’s statement - amounting to gross and deliberate attempt to alter the facts … has not been commented on or investigated. There has been no attempt to confirm Michael’s wording as truthful or not.” (my italics).

The plaintiff deliberately obstructed and closed down an investigation by a director of  NWDS into staff bullying by the plaintiff (whole matter but especially paragraphs 12 -13).

True. A senior member of staff made an appropriate complaint to the board about being bullied by Deborah Gersbach CEO, as required by NWDS policy 1.7 - Complaints. The policy required that all complaints about the CEO should be made directly to the board, not to the CEO. Deborah Gersbach who attended that, and every, board meeting refused to allow the board to address the complaint and changed board policy such that complaints about the CEO should be directed to (investigated by) the CEO. She threatened to resign “if this ever happens again”.

The plaintiff forced a director of NWDS to resign by falsely accusing him of leaking   confidential information (whole matter but especially paragraphs 12 -13).

The plaintiff took advantage of an intellectually disabled director by manipulating him  to vote against his actual intentions (whole matter but especially paragraph 14).

From above:
The plaintiff as CEO of NWDS, exercised control over all policy and direction decisions of the board of NWDS by appointing compliant individuals to the board and forcing board members to leave if they displeased her (whole matter but especially paragraphs 2, 18 and 21).

the Third Matter Complained of was published to persons who knew that the  plaintiff was the Chief Executive Officer of NWDS, …By reason of the publication of the Matters Complained of, the plaintiff has been brought into hatred, ridicule and contempt and has been greatly injured in her character and reputation and has suffered hurt and embarrassment and has and will continue to suffer loss and damage.The damages in relation to each matter complained of are increased as a result of the grapevine effect of the repetition of each of the defamatory  imputations.The plaintiff’s hurt as a result of the publication of the Matters Complained of was  aggravated by:The plaintiff’s (‘the defendant’s?) knowledge of the falsity of the imputations in each matter complained of.

No. I believe that all imputations are true. I have documents to support all the statements here and in the article.

SIGNATURE OF LEGAL REPRESENTATIVE             I certify under clause 4 of schedule 2 of the Legal Profession Uniform Law Application Act 2014 that there are reasonable grounds for believing on the basis of provable facts and a reasonably arguable view of the law that the claim for damages in these proceedings has reasonable prospects for success.

I have advised the plaintiff that court fees may be payable during these proceedings. These fees may include a hearing allocation fee.
Signature


FURTHER DETAILS ABOUT PLAINTIFF
Plaintiff            DEBORAH GERSBACH
Address             168 Mulgrave Road
MULGRAVE NSW 2756
Home
A disturbing story from the disability not-for-profit sector
NWDS CEO sues for defamation
A Letter from the CEO
The NWDS Board
Become a member of North West Disability Service
Contact us. Tell us what you know
Resources and Help (for bullying and reprisals)
Alert the ABC if you have concerns about NWDS​
Protecting Charities from Fraud
About Us